Recently I was digging around the internet and stumbled upon Jeremy’s game – a bit more digging and I found out that he was using Cheetah3D for the all the modelling. Fast forward a few weeks and that game – Jezza, is now available for iPad in the App Store. I got to speak with Jeremy about his game and where Cheetah3D fits in…

Tell us a bit about yourself…

I’m pursuing a dream to realise my own gaming creations which is something I’ve been planning (well, dreaming about) for many, many years. I’ve been programming computers using many languages and platforms since the ZX81 days and have been in and out of several 3D packages (3D Studio MAX, Lightwave, Modo C3D and others) on a casual basis since university in 1997. I adopted Open Source, the web and the Mac platform in 2002. I adopted Unity3D and Cheetah3D as my game making tools in 2012. 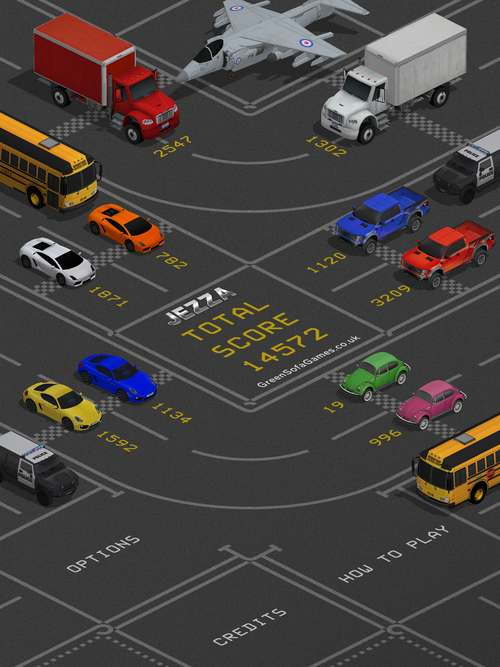 What made you want to make Jezza the game…

The game I really wanted to make turned out to be too ambitious and didn’t feature cars at all. After 2 months of exploring the game dynamics, I realised, it was going to take at least a year, which in my estimating experience, meant it would probably of taken 2 years! I’d previously made a conscious decision to take 6 months out of paid freelancing to create and publish an iPad game and going beyond 6 months wasn’t an option. So, one weekend at the end of February, I stopped and reviewed my idea list and at number 5 was “ISOCar”. My other ideas are currently too ambitious as well. 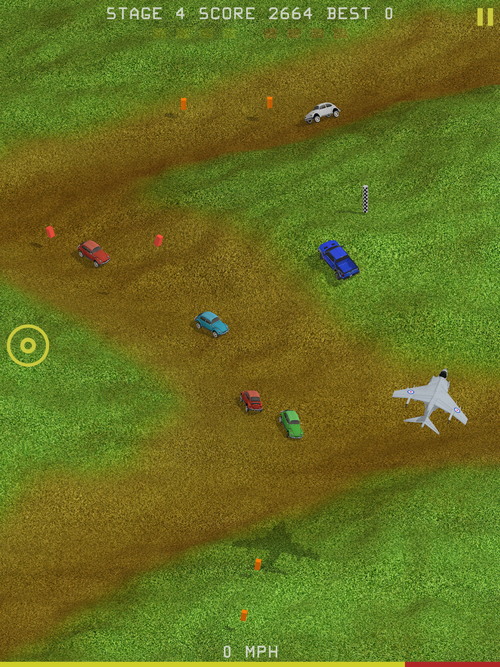 ISOCar referred to a simple desire: race around a piece of portrait art that has a fixed isometric view. There is something clean and tidy about a colourful isometric view that I like. Also, I knew I didn’t want to create just another racing game so I completely ruled out the concept of laps and lap times before I started work on the gameplay.

I knew I wanted high quality pre-rendered ambient occlusion, some pre-rendered main lighting and high quality realtime shadows. I wasn’t after a photo-realistic look for the vehicles nor the scenery, but rather an abstract look with subtle depth. The effect is most obvious in the Bridges, Streets, Blocks and Runway gameplay areas. The Car Park area is the only area with no decorative features due the unique gameplay dynamics of that particular area, i.e. everyone just runs riot burning rubber. 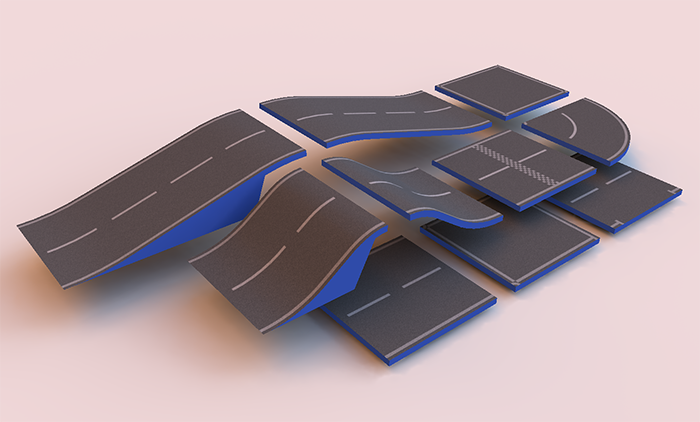 The game is called Jezza because its my nick name, it’s short and individual. I almost called it Tiny Turismo, but I think users may relate this too much to Gran Turismo and expect something similar – which it is not. Some might say it’s a weak reference to Jeremy Clarkson or the Top Gear show, and they’d be forgiven since you do score points for taking out caravans and you do perform crazy moves like drive underneath Harrier Jump Jets – but it’s not a reference to anything – it’s just a game I thought would be cool to look at and fun to play.

Jezza is actually my second published game – my first was on page 7 of the May issue of Sinclair Programs in 1985. It was called CopyCat and you had to type it in yourself! Showing my age now!

How long have you been using Cheetah3D?

I knew about Cheetah3D since the early days but didn’t buy until version 6 came out which had the physics engine integrated. It looked really good and was a steal at such a low price so I thought I’d take a serious look.

Personally, I’ve gained most of my confidence with 3D by watching videos of other skilled artist using other 3D packages. For me, manuals and books serve as reference material for the finer details of a tool or function. I’ve learned the most by watching Andy Brown do some amazing things with early versions of Modo. All those skills are transferable to Cheetah3D. Ok, Cheetah3D doesn’t have the plethora or depth of modelling tools that Modo has, but in practice with Cheetah3D, there is always another way around the problem. The toolset in Cheetah 3D feels generic – which is a very good thing indeed. 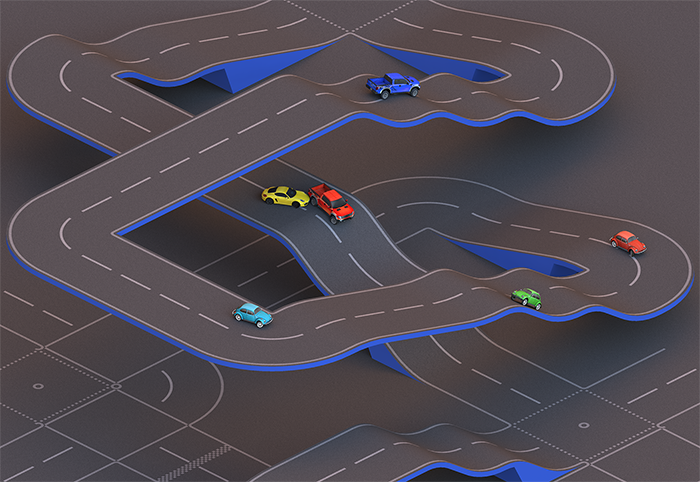 What made you choose Cheetah to model the elements for your game?

Before the release of Cheetah3D v6, I had aspirations of producing some short animations and had already purchased a Modo license plus spent the same again on training materials. Luxology was in full swing and their Mac version was reasonably slick. For some time I had both Modo and Cheetah3D permanently on my dock and felt comfortable with them both – but not an expert in either of them. When it came to doing some serious general 3D for games, I found myself reaching for Cheetah3D much more than Modo. The point came where Modo wasn’t on my dock anymore and I sold the license. Modo was great but it did crash more than I liked. Cheetah3D has never crashed on me yet and the immediate general purpose feel of a completely native OS X application keeps you coming back.

Previous game experiences are my primary source of inspiration. I remember my emotions the first time I played Microsoft’s flight simulator – version 1.0 – I remember being thrilled with the 3D view out of the cockpit but more thrilled about using the paper charts and a protractor to successfully navigate between airports – just using VOR radio signals! That may sound deeply sad and crazy to some, but I loved it. I remember Super Mario 64 as being the most stunning interactive 3D experience yet, and The Zelda series on the Nintendo 64 had some truly special moments that you just don’t get with books or films. There are many other games that simply drew me in on a deeper level and inspired me to want to create something of my own. Jezza is not special or that innovative in the same way as any of those great games are, but it is fun and unique in the way it’s presented and in how it’s controlled via a touch screen.

To quote @keefstuart on Twitter: “Videogame design is the most inclusive, democratic and distributable form of self-expression in the digital age. And it has an *audience*.”

Maybe Jezza took inspiration from Sim City and Frogger. I say maybe because it wasn’t a conscious decision. The visuals could be described as a zoomed in rendered view of small part of Sim City – and the Motorway area in Jezza soon begins to feel like Frogger as you play chicken with the on-coming traffic!

Take time to watch videos of other artist using 3D software – preferably Cheetah3D – but the concepts and how you approach a modelling problem are fairly common across 3D software packages. Don’t give up, but realise it’s something you’ll never stop learning and it can take a while to become confident. Finally, don’t start by trying to learn character modelling and animation until you’ve created lots and lots of simpler things – the danger is that you will get too frustrated and give up completely.

Which are your favourite/most used tools in Cheetah?

The split tool, smart folder, radiosity and baking tags, the modifiers and the displacement modifier in particular are my favourite most used tools – but that’s because of my current workflow. The displacement modifier was brilliant in creating the Off Road area in Jezza. I love how immediate and neat the whole package feels. I’ve only tinkered with the particle and physics tools, but I could easily play with those for months and never get bored. Smart folders were great as the game areas are built from lego style building blocks that are separate 3D files. I just referenced the blocks I needed into a new Cheeta3D file to create a new gameplay area. 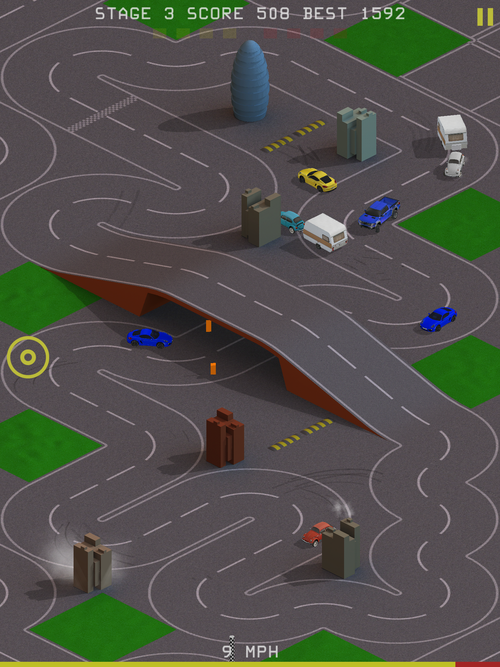 How could I not mention the Cheetah3D forums! Probably my most used tool of the last 6 months! Plenty of truly amazing work, really nice people who are generous with their time and explanations for others. Friendliest place on the internet probably!

All the areas, decor, surfaces and roads were created directly with Cheetah3D and baked into 2048×2048 textures for import into Unity3D – which is what you actually drive around on in the game – and they didn’t need to pass through Photoshop either. The vehicle models were sourced from elsewhere but they all passed through Cheetah for modification and optimisation. The vehicles in the game all have realistically modelled wheels using a real car physics engine actually attached to each wheel. The split tool was great for detaching wheels from the original models and getting them aligned perfectly. Precision was crucial here, getting a wheel 1mm out of alignment meant a car that would wobble going in a straight line.

Anything else to add?

Cheetah3D just doesn’t get the attention it deserves. It seems to have a reputation for being a bit basic and/or for beginners. I know it lacks some truly high end features that only high-end teams might need, but I do think it’s underestimated. It’s great to see Mac3DSoftware emerge and fly the Cheetah3D flag.

Big thanks to Jeremy for the interview and we wish him well with Jezza!